It's great experience to have massage with nice female massage therapist, she did over my expectations. I need relax.
Pros: Nice conversation with her, soft hands, relaxed, will be back
Cons: I hope she has more strength

Nice experience
Pros: will be back

Review for SERVPRO of Ft. Lauderdale North by jj
Rating:

Atiya makes me smile. I had a chance to spend some time with her and Ty going over-mold information, insurance issues, and next steps. When we were done, I trusted ..
Pros: People are kind and knowledgable.
Cons: None. They were real professionals

The burger is amazing! Always a good experience
Review for SWAY Nightclub by Nicholas
Rating: 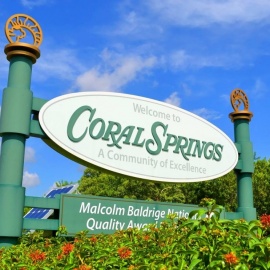 Hotels & Things to Do in Coral Springs

The Walk of Coral Springs

The Village at Gulfstream Park

With credentials like the above, and the fact that it is located on Florida's southern Atlantic coast only 20 miles northwest of Fort Lauderdale, Coral Springs (chartered in 1963 as a "planned city") appeals to both future residents and visitors.

The "Our Town" annual festival since 1979 features a beauty pageant, car show, carnival rides, and more.

"The Walk", an open-air entertainment and shopping center, is a main feature of downtown, which area is being redeveloped at a cost of approximately $700 million.

The Sportsplex at Coral Springs features twin ice rinks, an Aquatic Complex, a Tennis Center, Dog Park, the Sawgrass Nature Center and Wildlife Hospital, etc.; and the city also has over 50 parks.

The Coral Springs Center for the Arts includes a 1,471 seat theater which has popular shows and a yearly Broadway series. There is also an 8,000 square foot Museum of Art.

A covered bridge was built in 1964 to promote the town.

Coral Springs's stringent building codes were designed to retain the aesthetic appeal, and a 12 story condominium is the tallest building in the city with only five other buildings of 10 stories each. There are strict restrictions on landscaping, commercial signs, exterior paint colors, etc.

If you're looking for a quick bite to eat or want to dine from the comfort of your own home, these carryout and delivery restaurants in Sunrise are perfect for you. From pizza diners to sushi cafes, these...

If you're looking to dine on one of the many delicious restaurants in Oakland Park, but you want to eat in the comfort of your own home, this guide is

If you're looking to stay home and still check out delicious dining in Pembroke Pines, we have the best choices for you! This 954Area local guide has all the best delivery and

Feeling nostalgic for the good ol' days? Staying healthy and safe is the top priority across the world, but it doesn't mean we can't celebrate Easter in Fort Lauderdale with so

Things To Do in Fort Lauderdale This Weekend | January 16th-19th

From a fashion show to a beach festival, events in Fort Lauderdale always pique your interest on the local happenings, and weekends are the best time to participate in some fun

Crossfit Gyms in Fort Lauderdale To Help You Get In Shape

If you want to get in shape with some of the most intense and entertaining workouts, these CrossFit gyms in Fort Lauderdale are perfect for you!

New Year's Eve in Fort Lauderdale is here! 2020 has come and just like that the new decade is here. Here are a few events in Fort

Things To Do in Fort Lauderdale This Weekend | December 5 - 8

Christmas in Fort Lauderdale is here and that means setting up Christmas decorations, drinking festive cocktails, and exploring holiday events in South Florida.

With so much going on for the holidays, you have to set aside time to shop for the ones you care about and the perfect day to do all of your holiday shopping in Fort Lauderdale (because there are...

Things To Do in Fort Lauderdale This Weekend | October 3-6

Looking to Eat International Foods for Dinner? Try One of these 954area Hotspots!

If youâre in the mood for some new bold flavors, youâre in luck! Fort Lauderdale and its surrounding neighborhoods have a vast array of international foods and flavors that will

Things To Do in Fort Lauderdale This Weekend | September 26-29

Chain Restaurants in Fort Lauderdale That Will Satisfy the Whole Family!

Chain restaurants are often forgotten about when planning a casual family night out however, in Fort Lauderdale, theyâre some of our favorite restaurants. Whether youâre looking f

Your Favorite Bar/Restaurant Destinations for Casual Nights Out in Fort Lauderdale!

When it comes to going out for a fun night on the town with your friends or family, planning, getting ready and making sure everyone knows the plans can be a difficult task. Sometimes, it makes me not...

Things To Do in Fort Lauderdale This Weekend | September 12-15

Things To Do in Fort Lauderdale This Weekend | August 22-25

School has just begun but the weekend is here! It's a perfect time to reset your clock before summer ends with one of the most fun events in Fort Lauderdale. From slip-n-slide kickb

Where To Find The Perfect Poke Bowls in Fort Lauderdale

If you love sushi in Fort Lauderdale you are in luck! The newest dining trend, poke, is sweeping the nation and is basically sushi in a bowl. With so many different optio

School is right around the corner and depending on how you feel, you'll want to celebrate or forget about it with some fun things to do in Fort Lauderdale. From fun backyard barbecues to over...

Cool Off at These Water Attractions and Pools in Fort Lauderdale

Fort Lauderdale has fun in the sun waiting to happen. From beaches to pools, water parks to splash pads, these water attractions in Fort Lauderdale are for those summer

Of all of Germany's contributions,

Things to Do for Father's Day in Fort Lauderdale

Dads in Fort Lauderdale can expect plenty of things to do for Father's Day. Spend some fun in the sun or the day indoors playing games following

Where to See the Easter Bunny In Fort Lauderdale

Easter is fast approaching, and if you have kids, that means you'll want some photos to commemorate the holiday with everyone's favorite oversized bunny. If you're wondering where to se

A Comprehensive Guide to Neighborhoods in Fort Lauderdale

Fort Lauderdale is essentially a smaller, somewhat slower version of Miami. You get all the perks of Miami like beaches, nightlife, bars, and sprawling suburbs w

You're probably thinking the same thing we are. Where did the year go? Once you get over the fact that you have to say farewell to 2019, it'll be time for you to start making your plans for the new year....

Get Caught Under the Mistletoe With Fun Holiday Dates in Ft. Lauderdale

The holidays are a time of giving that are best spent with those closest to you. And if you're in a relationship, there probably aren't many people you're closer to than your significant other....